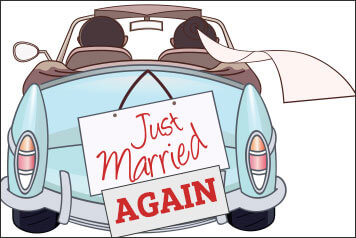 I’ve got news for half of you out there: You are going to get divorced (or are happily already divorced, he didn’t deserve you anyway). Approximately 50% of New York couples I meet have been divorced and most are on their second (and sometimes third) marriage. The desire to take care of one’s spouse, especially the spouse that spent her “golden years” with you sounds fair: While your first spouse was there for you during some of the most active years of your life – i.e. back in the days you could order dessert without blowing up like a balloon – they are not there for your aging years when gravity finally takes its toll out on your physique. But hey: You didn’t have money during Spouse #1, so even though the ravages of time are slowly setting in, at least you have some money if you pass away during Spouse #2.

The Issue: There may be children from that prior marriage. Whereas the thought of your cheating ex-spouse may make you think you will be having a reunion with your lunch, your children are (often) worth suffering the nausea of caring about. Most parents do want to leave some money to their children, but not entirely at the expense of their disenfranchising their second spouse. This issue is compounded when the second spouse also has children from a prior marriage, or where there are additional children between you and Spouse #2. And even more complicating is when the new couple has decided not to get married or have more children together but do want to take care of each other if one of them dies. Needless to say, these circumstances have led to many colorful discussions during many consultations, including yelling, accusations, and way-too-mean looks.

Even though both mothers and fathers face estate issues relating to second spouses and pre-existing children, I run across this issue more frequently with fathers. This is because:

AND SO, the challenge is (1) how do you take care of your current spouse, while (2) not completely dispossessing your children? (I’m not trying to pick on the ladies here, but because I see women out-living their male companions 80% of the time, if not more, I’ll phrase my suggestions below as if the husband/father dies first).

For assets that pass by a Will, the deceased spouses can set up a “Qualified Terminal Interest Property” Trust [also referred to as a “QTIP”]. A QTIP allows the surviving spouse to take income payments at least annually for the rest of her life, while maintaining the principal for the deceased parent’s first marriage’s children and grandchildren.

For assets that do not pass by a Will (retirement plans, life insurance) a Trust can be used to collect the assets. Under these circumstances it might be best to choose an independent, competent Trustee. Why not name your new spouse? Because she may distribute all the funds to herself. Why not your children? Because they may distribute nothing to their “Evil Stepmother” in the hopes of keeping all of Dad’s money themselves. Again, naming an outsider to serve as a Trustee is not an easy discussion to have, but its one that must be held.

Joint property (typically a house) can be held in a Joint Trust created and administered by both spouses. Upon the first spouse’s death the second spouse can continue living in the property but the trust becomes irrevocable so the first spouse knows his/her children will one day inherit something. Upon her death the house can now go to the children.

Another alternative I suggest, though infrequently, is to pass some of the deceased spouse’s assets directly to his children, with the remaining funds going to the surviving spouse outright with no strings attached. This clean-break approach is preferable when the second spouse and children from the first marriage do not get along– which I see all the time.

There are no automatic answers. I have seen plenty of spouses in second marriages who innately trust each other to take care of children from prior marriages and leave the funds outright to the surviving spouse. I’ve seen others express such rancorous behavior that one spouse effectively gives up on preexisting children. Hey, that works too (at least for the winning spouse), but if things get too rocky your attorney should let you know that he/she cannot effectively represent both of you and you should get a different attorney than your spouse. Whatever the case, the best way to deal with differences between a current spouse and children from a former marriage is to address them head on, come up with a plan, and be open to the fact no one may get everything they want.